The Left Hand of God - review

By Jo - July 07, 2014
I've seen this book on and off for months now and when I saw it again in our local library decided to give it a go....I'm so glad I did!  It's not quite in the same league as Brandon Sanderson, Brent Weeks or Robert Jordan as this feels like its aimed more for late teens or early 20's but it's still a wonderful read.

This is what the blub says on the back - The Sanctuary of the Redeemers is a place where children endure brutal cruelty and violence in the name of the One True Faith. Lost in the Sanctuary's huge maze of corridors is a boy. He is strange witty and charming, and violent. But when he opens the wrong door at the wrong time he witnesses an act so horrible he must flee, or die.

What it doesn't say is that the book is a joy to read with adventures on nearly every page. I felt for the boy Cale from the first, who wouldn't reading about a young boy who goes through so much abuse. We follow Cale growing not only in body but in experiences and I found this was written well. I loved how his relationships with those around him stayed the same on one hand but changed as he matured.  I cheered and groaned throughout, really getting into the story.

Hated the ending of the book, not because it was bad but because I hadn't got book 2 (The Last Four Things) all ready beside me to continue!!  Now I've book 2 and book 3 (The Beating of His Wings) all set to go :-) 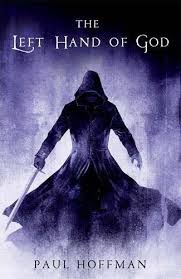