By Jo - April 05, 2011
Yes don't faint but I've actually finished two of my UFO's. For the new stitchers out there who haven't heard this term they're "Unfinished Objects"  Many of us start a project only to be sidetracked onto something else soon after....I'm totally guilty of this much to my DH's annoyance.

Anyone who has followed my blog for a while will have heard about the gift SAL I was stitching. This was my Monopoly board that I started stitching for my mum's birthday in 2010. Yep a year and 2 birthdays later and it's finally finished. After much decision I decided to quilt it instead of a frame and she had it in time for Mother's Day. Mum taught my brothers and I to play Monopoly and we spent lots of happy hours playing with her...until she turned into the original slum landlord and cleaned us out!!  Here is the finished SAL that I tried to match to my mums original board as much as possible. 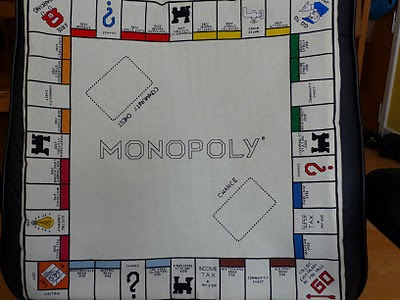 The second UFO I finally finished was for my MIL. I started this Quaker bookmark last year whilst sat in Runaround which is a playcentre near us. The kids all took off playing so I started this but a few days later I went wrong, put it to one side and forgot about it. After frogging the incorrect stitches I re-did it and managed to send it down to my MIL for Mother's Day. I stitched it on some spare aida that I hand dyed pale lavender and the thread was Purple Iris from The Gentle Art.  I couldn't tell you where the chart came from as it was a freebie that I found in my folder all printed out, unusually for me I hadn't written the website on it. 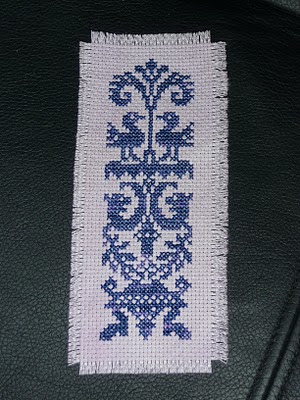 The next UFO to be worked on is my French Postcard SAL. DS1 is starting private French lessons this month so I'm going to finish this for him. I'm up to April which is apt really (pity it's last April's square though!). This is what it looks like so far - 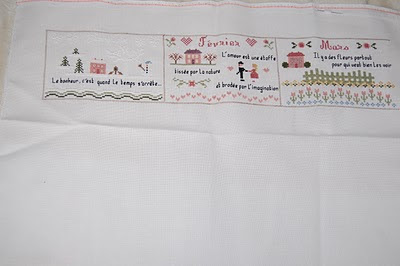