Too Little Time to Stitch

By Jo - June 19, 2010
I've not had much time to stitch in the last month but what little time I have had the needles have been out. As some of you know we've had a few problems with DS2 but after getting help we're now on the right track so fingers crossed I'll get more time to sit stitching.
Here's the progress so far on my Darcy photostitch. I'm now over halfway there and she seems to be growing fast now. 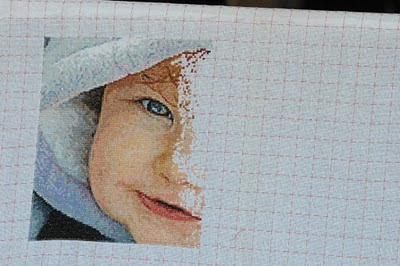 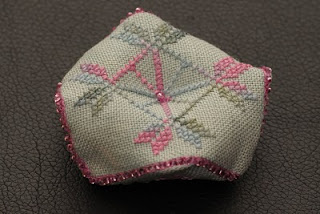 This is a small biscornu I made designed by Carla Rizzie. I used pale green linen with hand dyed threads and beads for the centre and around. It's really tiny when you see it in real life. 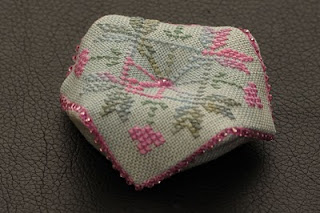 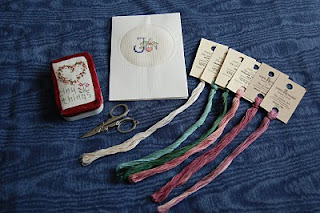 I recently took part in the May Day Exchange with my stitching group Friendly Stitchers. This is a photo of what I received from Ally. A beautiful card as well as a lovely tin containing tiny scissors, stitch unpick, 2 gold needles and some wonderful threads that I'm saving for a sampler I want to do later in the year.  This has so come in handy when I'm sat waiting for DS1 to finish his karate classes, I sit stitching while he does his martial arts...heaven!
DH also bought me Jane Greenoffs new program iStitch (which is brilliant) so I've also been playing on that. I designed a small simple biscornu for a friend who had never done one before. I made the back the same as the front as it's her first one, you could just put the small flowers on the back instead. 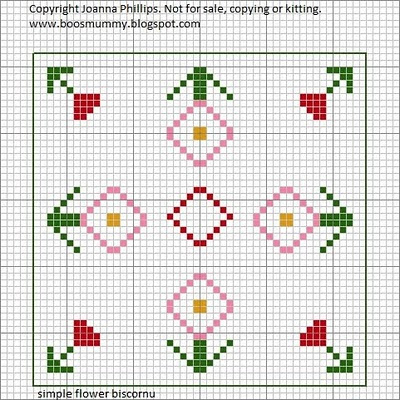 I'm also working on my UFO on Thursday nights, my Beau Bands sampler when I can find time and I'm in the middle of stitching a couple of biscornus. One is for another exchange with Friendly Stitchers, this time it's on the theme of lavender.  I've also got everything ready to stitch "A Spot of Coffee" for DH as he survives by drinking as much coffee as possible during his busy days at work.
My book challenge is going well, I picked up a new audio book today. Skeleton Coast by Clive Cussler, I love his books and at least I can listen whilst stitching. Have to say though my 5yr old is outshining me on the challenge, he's now up to 39 books and his last one was quite thick. We went to the library this morning after his karate lesson to pick another book for him, this time it's Horrible Henry, he's already read the first 4 pages to me tonight. I don't count any books he reads unless he's either read them to me or to his teacher at school but they seem to give him easier books than I do!!
Back to the needles and my lovely book, thank you for your lovely comments, they really keep me going when I'm feeling down.
Biscornu Darcy Photostitch Exchanges Finishes Freebies Reading Challenge WIP