A Week In Kent

Here we are back again after a lovely week in Kent visiting DH's family. We stayed in a 3 bedroomed caravan (yes it had all mod cons otherwise we wouldn't have been there!) on a great site called Two Chimneys, the kids love caravans and were so excited.  The weather has been fantastic for us and we spent everyday out somewhere. The journey down on Saturday with 3 young children obviously had its hiccups but altogether they were pretty good, took us about 5 1/2 hrs to get there as we stopped at Cambridge Services to have lunch. Thankfully we have a 7 seater so spaced the kids out and put the luggage in our roofbox and at the side of Luke who was squashed into the rear; Peter was in charge of passing snacks back and relaying messages...DH says he's buying walkie talkies for Luke and himself for the Scotland trip :-)

On bank holiday Monday mum and dad had an early birthday party for Luke, he'll be 4 on the 18th April. When we arrived at the house there were balloons and banners outside and party food laid out in the dining room. Luke's face was a picture. He had a Thomas the Tank Engine cake and his favourite part was his present...a Henry hoover, he's been asking for one for ages. Dad had set up a tent in the garden for the kids to play in...needless to say the boys absolutely loved it. It's Luke that is peeping out, they had a pile of plastic play food in there with them.

On Tuesday we gave mum and dad a rest and went off to Canterbury where we had a great walk round and visited the cathedral  Tony took some fantastic shots, there are too many I love to put on here so I've just picked two of my favourites. Peter decided that although it was nice it wasn't as nice as our local church St James.  Amazingly, or not ;-) I found a stitching shop...I was very good and only left with a chart. We did have lunch in a cafe with free wi-fi so I managed to pick up my emails...Tony=1  Me=155 :-)  A walk along the river so Darcy could see the duckies and she was happy.

A few photos taken by DH (who else?!)  of the kids at Minnis Bay where they loved the playground, on the Thursday morning we met up with Tony's friend Jason, his wife Julie and their girls here. Then around lunchtime mum and dad came and we all had a picnic...spent about 4hrs here, everyone caught the sun and the kids slept like logs! 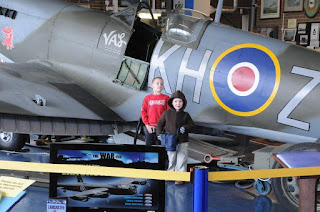 We also managed to visit the Spitfire & Hurricane Museum which the boys loved. They had a wonderful tapestry on one wall, it was under glass so the photograph didn't come out very well, Peter was whizzing around taking hotographs on his camera (although being only 5 he didn't realise that some of the shots had his finger over the lens!) but he enjoyed himself and that's all that counts. One of the volunteers took the boys under the rope to have their photograph taken by the Spitfire.

One place we spent a lot of time, mostly in the late afternoon early evenings was Deal beach. I love this particular beach as it's shingle rather than sand so my car didn't get coated (my dad took it for a full valet before we went away) The boys adored it and spent ages throwing stones and seaweed into the sea. Peter played wave chasing...one of Tony's photos perfectly captured him running from one wave after he'd already been caught a few times.  On Friday we went early morning and I found another stitching shop where I picked up some thread and the boys said goodbye as we were leaving early on Saturday. Deal is a lovely little town that if you're down that end of the UK I highly recommend.

On the way home we stopped off at Nene Valley Railway so we could have some lunch and as a surprise for Luke who loves trains. The biggest surprise for him was that Thomas the Tank Engine was there, he'd been working all bank holiday so was parked in a siding having a rest...Luke didn't mind he was thrilled to see him!  A steam engine was just leaving as we arrived so the boys loved watching it go and one came in a short time later. We're going to take them back down one weekend to have a ride on a real steam train.

Stitching wise I'm not able to show what I've been working on as before we went away I was working on an exchange piece that hasn't been posted yet and while away I took my gift SAL that seems to have turned into a UFO. Did quite a bit of it and I'm determined to work on it every Thursday night when the kids have gone to bed as its UFO day on my Yahoo group Friendly Stitchers.  I did find a fantastic haberdashery shop in a back street in Ramsgate...just had to increase my stash a bit so bought a few charts and some threads. The shop was amazing, floor to ceiling with wool, buttons, threads, ribbons etc, could have happily spent ages in there but DH and the kids were in the car waiting. Can't show the threads as they're for an exchange but here are the charts, a couple of them like the Mirabilia Snow Days are ones that I've been wanting for ages so I'm thrilled.

I've got Butternut Road's Christmas Visit; Kokopelli Christmas; Just Nan's Gloriana; Anchor Seasonal Samplers; Sue Hillis The Bus Stop; Mirabilia Snow Days; Listen Honey-Life's a Stitch, On Dasher On Dancer and If It's Not Men.  Then there was a couple of magazines, some fabulous bobble wool and some threads.
Exchanges Kids SAL Stash