By Jo - March 31, 2010
Yes the sun is shining, my washing is hanging outside on the line and the birds are twittering...Spring is finally here :-)  I've found the only trouble with the sun finally coming out is that I look around and see all the jobs that now need doing in the house....the staircase still needs painting and our lounge definitely needs re-decorating, the garden lawn needs cutting and also the patio finishing so I've a feeling my stitching time may be taking a cut in hours for the next couple of months.

Good job I've some progress on my SALs and also a small finish. My gift SAL is coming along but not very fast as it keeps getting relagated to the bottom of the pile. The Darcy photostitch is moving slowly as I've hardly worked on it thanks to my boys wanting their things doing. Here is a photo of the whole project up to tonight and also a close up of some of the confetti stitching. 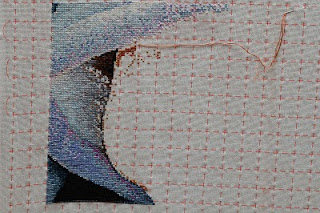 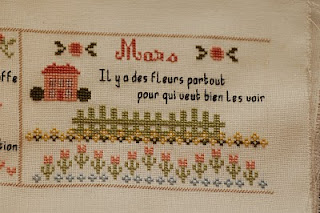 My French SAL designed by Maryse is coming along, I've completed March...well the design anyway, I've just got to do one side of the frame. 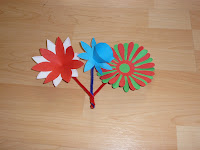 Our son Luke goes to a craft club on a Monday afternoon after he's finished nursery where he makes all sorts of things. Last Monday he made an Easter bunny picture and they were also making flowers. Luke wasn't impressed with the flowers saying they were for girls so he coloured while I made the flowers, have to say I enjoyed making them and am quite pleased with how they look as they only took 5 mins.

I've also been drafted to make our DS1 Peter an Easter bonnet for his school Easter parade. As he's a boy and not really a 'bonnet' person I bought a straw trilby and spent ages putting this together. It was going to be held in the school playground so parents could watch as the children did their parade but due to wet weather so far this week and more forecast the school decided to hold it in their hall which isn't big enough for all us parents. A shame as last years was wonderful but I'm sure the kids will enjoy themselves whether we're there or not.

Luke has finished nursery for his Easter break so came with myself and Darcy to playgroup at our local church. I promised Luke I'd post a photo of him on my blog for everyone to see so here is a photo taken of them both playing together (nicely for once!) 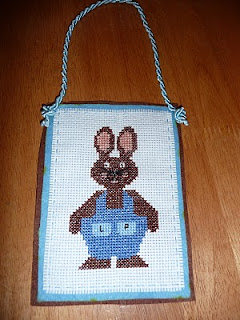 My son Luke also saw a design of a Chocolate Bunny by Carla Rizzie that he had to have so I managed to stitch it for him. If the backing looks a little lop-sided ...it is!...having a 3yr old helping to put 'his' bunny together wasn't the easiest task I've ever done LOL!  He's thrilled with it though so that's what counts, it now hangs on our mirror next to the kids Easter cards they've all made at school.
Calendar Projects Darcy Photostitch Finishes Kids SAL WIP