By Jo - March 14, 2010
Our daughter Darcy has been ill so my stitching all but stopped for a week and I couldn't really get onto the computer for any decent time to catch up on my groups and favourite blogs. I did manage to put a little time into the Darcy photostitch which is growing nicely now. Thankfully she's all better now and Luke who also caught the virus is better. I did manage to get a lot of the confetti stitches completed on Thursday morning as Darcy went back to nursery so I sat down watching Lost In Austen and had a lovely relaxing morning. 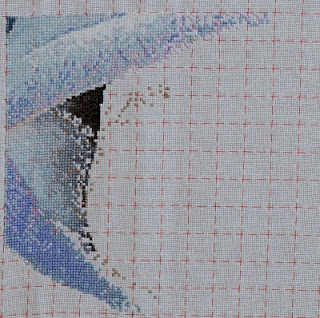 Here are all 12 months of the calendar project all stitched up....now comes the hard part, putting them together. I'm planning on all 12 being part of a quilt. I've got the material to make a frame around each one; it just needs cutting into the correct size strips and putting together...unfortunately that could take a while as
with the children around even the smallest task takes twice as long.

I've also bought the fabric for DS2's dragon...he's been constantly asking when I'm going to start making him a dragon. It's going to be on red aida, I do prefer stitching on evenweave/linen but the red I found wasn't the right shade so had to go back to aida. I got a huge 1m piece of 16ct that I can also use for cards, ornaments etc. Now just need to get the threads as typically it calls for colours that I haven't got in my collection.


DS1 has seen another snowman from the Just Cross Stitch Ornament mag I bought and wants that stitching...thankfully it's a small one so shouldn't take too long. The boys have decided they want an ornament each making in time for Christmas but they want to pick the design. But I have finally put together his snowman that I finished last year but not in time for Christmas...hurray! 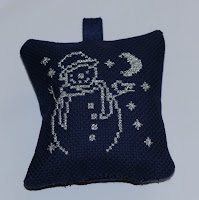 I've also managed finally to stitch February on my french SAL by Maryse, only took me a couple of evenings when Darcy was on the mend so hopefully I'll get March done in the next week so I can go back to my Beau Bands SAL.
It's a bit creased as I hadn't had time to iron it before DH took the photographs

My 2010 Olympic Reading Challenge is coming along...while Darcy was ill I spent quite a few nights sat on the sofa with her and ended up reading aloud to her....she quite enjoyed Beat Until Stiff by Claire M Johnson (a cooking murder/mystery), makes a change from her In The Night Garden book anyway!
Everything seems to be back to normal with the kids (for a while anyway!) so I may manage to catch up on a couple of projects that have been put to one side.  The F1 season has kicked off so I should get some stitching time in while the races are going. Thank you for all your comments, the encouragement has helped especially when I've felt like I'm getting nowhere fast.
Books Calendar Projects Darcy Photostitch Finishes Reading Challenge SAL Stash WIP