I can't believe we're nearly at the end of February already...where has this month gone? I've not done as much stitching as I usually do this month, this is mostly due to committments involving my 3 children. How 3 small people who are aged from 2-5 cause me to not sit down for long is beyond me. Between school runs, after school swimming or karate lessons, playgroups and craft groups there's no time for stitching until they're all in bed and settled...so I generally have about 2hrs a night to stitch which means my projects seem to be taking forever to grow.  Mind you  the time passes so fast, it doesn't seem like yesterday that I was wrapping Christmas presents and now the boys are talking Easter eggs LOL! 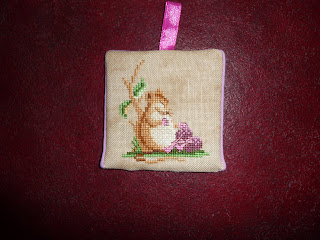 I can now show you a picture of a small ornament I did for an exchange with Friendly Stitchers, this is the Calendar Girls 2010 exchange. February's girl is Mouse (aka Michelle) so along with some fabric and threads I made her a little ornament with a snoozing mouse, couldn't resist when I saw the chart resting in the bottom of my charts box. 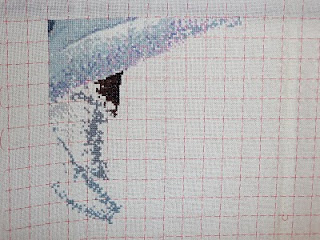 I've also been working on my Darcy photostitch, in fact this has been my main project for the last few weeks. I can finally see some growth to it. I did try working along the chart in the 10x10 boxes like so many people do but it's just not me and I found myself going off on a tangent with a colour I had in my needle. I don't like having lots of needles pre-threaded or parking either and there's a lot of confetti stitches so in the end I went back to how I like to work....in blocks of the same colour. Even DH is seeing the difference now which is a miracle LOL! 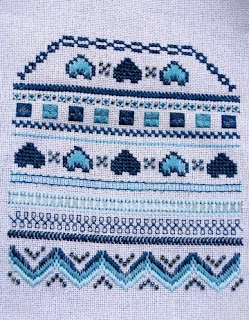 On Thursday night I picked up my Beau Bands SAL again after finding my old standby scissors. I was stuck on the drawn threads band until I got some scissors as my normal stitching ones don't have sharp points. VERY VERY carefully I cut the first thread and I was off, it took me a lot longer to do the stitching than the cutting. Must admit I'm thrilled I found my scissors as it's been bugging me that the sampler was sat there and I couldn't work on it. I've now done up to band 12, the Vandyke stitch in band 11 confused me as it's not in my stitch book but like every good stitcher I googled it and found a wonderful clear illustration. Sat doing it last night thinking "I hope this is right" and when I looked in the cold light of day (very cold I might add!) I love how it looks.  Now I've only 3 more bands to complete then section 1 is complete.

I've also managed to read a couple of books that are towards my reading challenge. One of them was "Peach Cobbler Murder" by Joanne Fluke. It's the first time I've read one of her books and I'm hooked. Not only does she describe the most wonderful desserts but gives the recipes for them....already got 3 written down so I can try them out :-)

I've also listened to "Up and Down the Dales" by Gervase Phinn which had me in hysterics as I was trying to cook the kids meals and clean up. Friday night I started "Crewel World" by Monica Ferris when I went up to bed, loved it as she talks stitching as well as a good story. I finished it last night and promptly went on the Sheffield Libraries website and ordered another couple.

On Tuesday afternoon DD goes down for a nap and I now get to sit and stitch for an hour so I'm going to try and work on another band of the Beau Bands SAL as the evening is devoted to my Darcy project.
Posted by Jo at 19:50 14 comments: 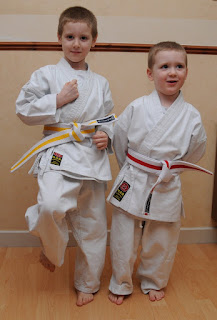 Although we're only at the beginning of February so far it's been a very busy month. Last week both our boys did their grading for their next belts in Little Dragons, which is the childrens class at Sheffield Dragons. Peter passed and is now on his second belt, Luke also passed and very proudly told us all he's getting a new belt. 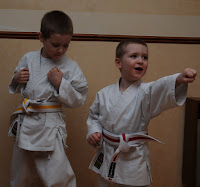 They had their presentation on Friday night where they saw Sheffield Dragon Cadets do a show and also one of their teachers (and Peter's hero) Kady Robinson performed. Kady has recently gained her Black Belt 3rd Dan so HUGE CONGRATULATIONS Kady from us all.  These photographs were taken that night, the boys couldn't wait to try on their new belts so it was like wrapping stiff cardboard around them! (They've since been through a wash twice to soften them ready for Wednesday's class) Peter is the one on the left, he's 5 and just been awarded his yellow stripe. Luke on the right is 3 and just gained his first belt, the red stripe. Luke is very shy and doesn't have a lot of confidence so we were nervous about him actually doing his grading and then going forward to receive his belt but he surprised us all....we're hoping it'll give him more self confidence for when he goes into 'big school' next year. Congratulations to all the other Little Dragons who graded and were awarded their new belts last week.

Stitching wise I've not done much, been too busy running around after the kids and car problems. Yes, my car ended up in the garage yesterday having all new brake discs and pads all round....argh!! Now we've got to sort out new tyres on the front...they don't tell you when you're taking driving lessons that actually running a car is sooo expensive. 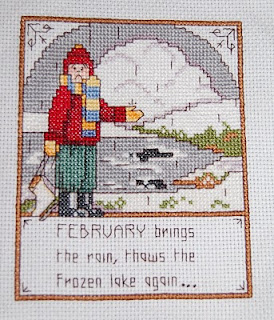 I've been working on a couple of exchanges but can't post photographs until they've arrived at their respective new homes. I've also been working on my gift SAL which is coming along nicely but not as fast as I'd hoped. I have completed February's calendar square though at the moment the weather isn't quite like this LOL! We're back to snow watch here in Yorkshire, it hailed so heavily today as I got the kids home after school that we had to sit in the car until it calmed down.

Incase you're wondering...yes the photograph at the top has changed. This one is a scene over Derbyshire that DH took last year. He's taken a lot in the last couple of months but most of them have snow featuring and I though it would be nice to have some sunshine to cheer us all up and make us remember that it won't be long before the snow is gone and the sun is back.

Also to everyone who has asked about the "Old Books" chart on my last stash shopping...The chart is one of The Cricket Collection, No. 132, called "Old Books" and designed by Vicki Hastings. 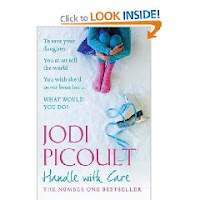 I'm not doing too bad on my book challenge, I've nearly finished Jodi Piccoult's "Handle with Care" it's a lovely book of a difficult subject. I've just downloaded my "Up and Down the Dales" audiobook by Gervase Phinn so tonight I'll tuck up with my headphones on.

Thank you for all your lovely comments about my stitching and children. It is a big encouragement to keep trying new techniques and projects. I hope to post a photograph of my Darcy photostitch next week, she's been sadly neglected this week as the very few hours I've had to stitch have been on deadline projects.
Posted by Jo at 21:17 9 comments: 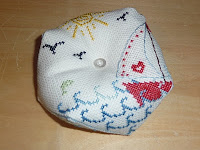 On my reading challenge I've finally finished The Shadow Rising by Robert Jordan, it's the 4th in the Wheel of Time series. I really enjoyed it but boy has it taken some time to finish it...more due to everytime I picked it up my eyes started drifting closed due to lack of sleep! Just read a lovely lightweight book called “A Load of Old Tripe” by Gervase Phinn. It’s set in Yorkshire and is short stories about a boy born after the war. It’s really good, funny and I can see similar situations from my childhood in it even though it’s set years before.
Posted by Jo at 12:11 11 comments: