Snowing Again Even On Stitching 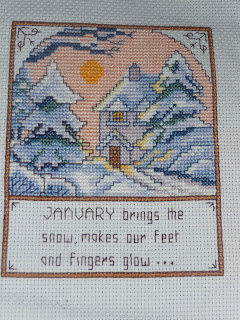 Here is the January square for my calendar...how apt is this for most of us?

Snow is covering the UK at the moment along with plenty of very low temperatures. Heard on the radio yesterday while I was doing the school run that we were as cold as the south pole in some regions...yep I can definitely believe it. Even Peter who never feels the cold started crying while we were waiting for his class to open as he was cold. The temperature in the car said -6 so bless his little 5yr old feet, they must have been freezing.  After I'd dropped Luke off at nursery Darcy and I picked up my dad and we went shopping where we bought Peter new boots, thick socks and a new scarf.  Luke luckily still fits into his 2 piece ski suit from last year so I just bundle him into that if we leave the house...he's like me and feels the cold straight away!  Darcy has been put back into her pram (to her disgust) and covered in with a thick patchwork lap quilt, cosy toes and rain cover down. Mind you pushing a pram in snow is something I'd recommend to anyone who wants to lose a few pounds...I reckon I lost loads yesterday on the school run as we can't park right outside the school LOL! 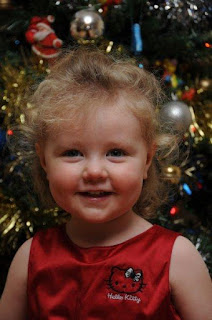 It was Darcy's 2nd birthday yesterday...can't believe my baby is 2 already. She moved into her new class at nursery which she loves as they have the sand table out all the time (in summer they have the water trays full as well so she'll love that even more!).  We didn't get her too many presents as she's just had loads for Christmas and at her age she'll not know the difference so most of her birthday money will go into her bank account.  We bought her a Happyland dolls house from the Early Learning Centre and gave it her last night when her dad came home....that was so funny as the boys wanted it faster than her!  She calls it her "casserole". She's inherited the boys Happyland Castle with knights etc and thinks its the same thing. 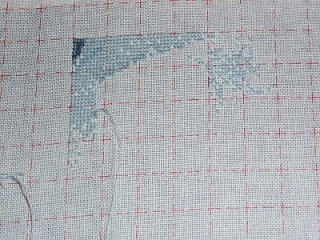 Due to snow days from school I've not managed to do much stitching on my Darcy Photostitch. Did get some time on Thursday morning when all 3 minxes were at school. Have decided that on a weekend instead of doing my secret stitching which I can't show on here yet as its for a present I'm going to work on my photostitch.  DH keeps making comments as I don't think its growing as fast as he thinks it should...this is what it looks like after a couple of hours this week.