By Jo - December 01, 2009
As regular visitors will by now have realised the photograph at the top has changed. It's now turned cold here in Yorkshire but 2 weeks ago DH, Darcy and myself went off to Bakewell for the morning. It was quite cold and windy but the sun was shining gloriously, even the threat of rain didn't happen until we got back to Sheffield. This photo is taken overlooking part of the Peak National Park, we just pulled into the side of the road so DH could hop out of the car with his camera. I'll bet the photos taken in winter with snow down would be fabulous...not volunteering to drive DH then!

I've finally caught up with my Christmas SAL, completed part 11 this lunchtime while daughter Darcy was having a nap and both sons were in school. I'm really pleased with how it's turned out even though I did change my mind twice on whether to put 2009 or Noel on it. As you can see in the end I decided on 2009 so that I can put Darcy's initials in the circles. 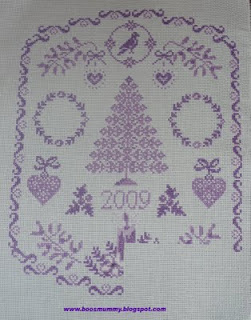 Tonight I've finally started on the sister design to my Believe project, this one is called Hope. I'm sewing it on hand dyed 28ct called "Sparkling Fairy Tale" by Sparklies Luckily I bought this before they went to the Harrogate Show as certain members from Friendly Stitchers (Hello Mouse!) (we have reliably been informed) raided their stall LOL! 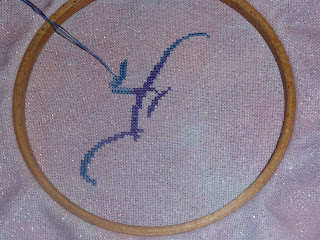 I've also managed to complete the 3rd part of my Christmas Wallhanging. Most of this was sewn while our eldest son Peter was in his karate class. He goes twice a week after school and each class is 45 minutes long, my dad usually has our younger son Luke with him as he gets bored waiting and daughter Darcy is with me but she loves sitting watching them practise on the CCTV. She's even picked up how to do the first Kata, she can't start lessons until she's 3 so heaven knows how much she'll be able to do in another years time after watching her brother! Must get moving on part 4 or I'll never get it sewn in time for this Christmas and there's only 3 weeks to go now. I did want to put baubles and trimmings on it but Peter said no after we'd read the story "The Little Christmas Tree"...who am I to argue with a 5yr old?! 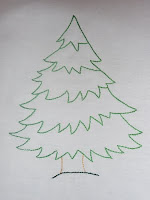 Finally here is December's Calendar square, no December fairy yet as she's had to be put to one side while I caught up on my SALs and other projects that needed completing urgently. 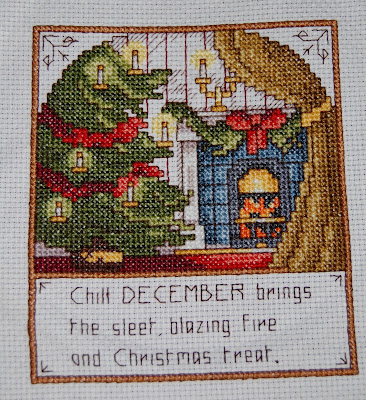