By Jo - December 15, 2009
Just had to put this photo first, our daughter Darcy taken Sunday morning. She came into our room and decided to sneak to my side of the bed to check if I still had a stash of chocolate but her dad caught her.

Here finally is a photograph of the Margaret Sherry design "Photographer Cat" that I stitched for DH. Managed to finally find a frame I liked and best of all it's a stand-alone frame so doesn't have a fiddly back on it. 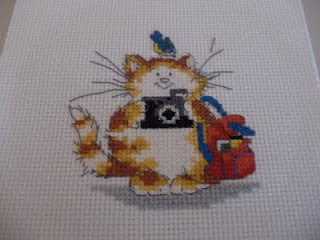 My Christmas SAL also came to a close after I'd stitched DD initials in the circles. Found this frame by accident while I was looking for something else. I would have preferred a purple border inside but they didn't have any the right size so white was the best choice. DD shouted "Pretty" when she saw it framed so that's all that counts, it's going to be hung in her bedroom after Christmas. Thank you Carole for a fantastic SAL. 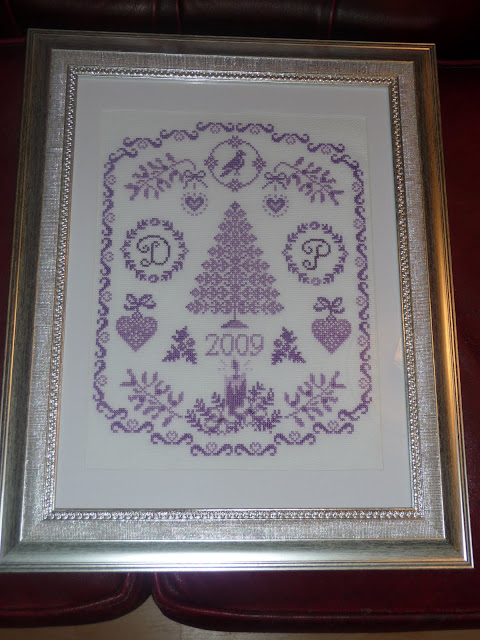 In the last week I finally started my butterfly square for the Quilts for Breast Cancer group, I couldn't find a butterfly that I liked so have adapted a design from one of my magazines. Instead of just 1 butterfly there are 4, each slightly different although all in the same colours. It should be finished by the weekend. Another square I've been working on I've had to design as I couldn't find a chart of an old fashioned pitcher jug. Most of the chart is done it just needs a bit of 'tweaking' here and there then I can start stitching it.

I'm also working on my A Stitch A Week with Friendly Stitchers, I've completed the centre panel and have last weeks square to stitch. Can't believe there are only a few weeks left of 2009, I notice it more with how many squares are left to stitch rather than a calender! Abi has designed a wonderful Band Sampler for next years FS SAL, I've already bought the material so just need to choose threads now. 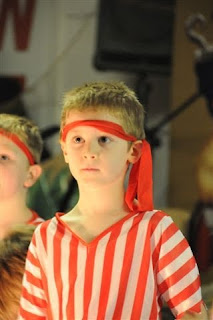 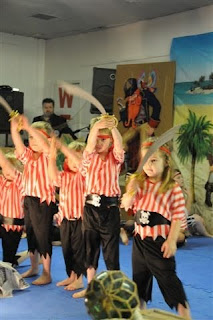 Last week was soooo busy here. DS1 had his normal karate lesson on Wednesday & Thursday, then on Friday we were told that he needed to be there at 5pm for a full dress rehearsal for their Christmas Show that weekend. Argh! Not only did Peter have school but he was going to see a pantomime (cinderella) in Chesterfield that afternoon, the coach didn't arrive back at school until 4.50pm so it was a quick rush back to Sheffield Dragons, into his costume and off he went to practice. Luckily the Little Dragons could come out at just gone 6pm so I changed him into his party clothes as...yep you guessed it...he had a party to go to, one of the girls in his school was having a 6th birthday party at a nearby play centre. Our poor little man had been out from 8.30am til 9pm, he's only 5 so is used to being in bed by 7pm. Saturday he slept in a bit but that night it was back to Sheffield Dragons for his show, I went and videoed it but we didn't get back until 9.15pm after all the Little Dragons were presented with a certificate for taking part so he was in bed late again. Up late again on Sunday and this time DH & I went so he took some photographs...we brought Peter out at the halfway interval so he was in bed an hour earlier. Monday morning he had his school nativity concert...which was fabulous so big clap to Beighton Nursery Infant School for a wonderful show. It made the weeks of hearing him sing Rockin Robin and Rockin Around The Christmas Tree worth it. DH took some photographs but everytime he saw his dad with the camera he put his head down. We've only got DS2s nativity on Thursday and then it's quiet time again...I'll be glad of the rest and being able to spend a bit more time at home stitching rather than being a taxi!