By Jo - September 05, 2009
This morning our eldest son Peter (AKA Boo) was in his first karate competition which was held as part of the Woodhouse Fun Day in our village. Woodhouse is a suburb of Sheffield city but still has its little village feel with a town square and local shops so every year we hold a summer fun day and also a winter festival where the local Woodhouse band perform christmas carols.
These are some of the photos of my little Peter doing his stuff. Master Terry is stood behind him keeping an eye on his Little Dragons. Terry runs Woodhouse Dragon, their Team Elite have some of the British Karate Championship members. http://www.woodhouse-dragon.com/ The little boy behind in the blue and red jacket is youngest son Luke, who clapped like mad when his brother finished. I'm the one peaking round from behind Terry so I could see my son 'do his stuff!' My nan is sat inbetween us cheering her great grandson on. 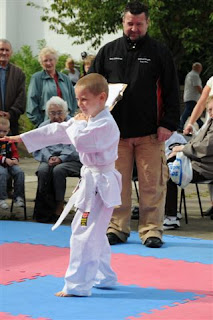 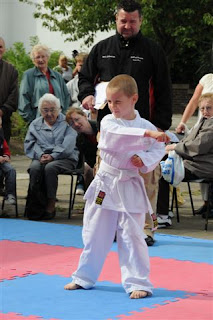 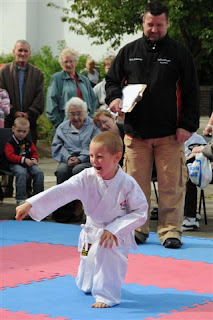 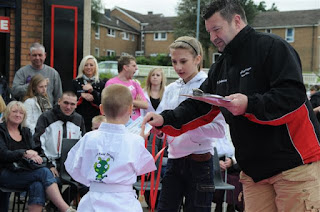