Need your help, DH bought me a DMC photostitch for my birthday as he knew I wanted to stitch a photo of the kids. WELL...trying to get our 3 to sit still and all look at the camera at the same time has proved impossible LOL. So I've said that I'd like to do 3 separate ones of them using my favourite photos. That was 3 months ago and he keeps asking if I've chosen a picture yet. Trouble is he's captured some fantastic photos of them so here are my 3 hitlist ones of our daughter Darcy, which one would you choose???? 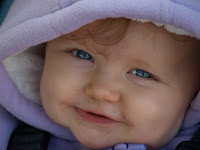 These are only 3 out of the original 20 that I'd picked to consider. Its the only trouble with DH having photography as his hobby, there are so many fantastic shots of the kids that I had to buy him a digital photoframe last year for his birthday as we couldn't keep printing them out!
So votes please on which Darcy should be in stitches.........
Posted by Jo at 20:56 13 comments:

Lots done but not much accomplished!

Boy can you tell the school holidays are upon us, DS1 is 5 today and (as most his age) is on the go from early til late. Luckily when the weather is nice enough he plays in the garden a lot with his younger brother and our neighbours little boy who is only a year younger than Peter.

To help keep them occupied I bought the boys some small A5 notebooks and they're using it as a holiday notebook. In it they're putting cuttings, plants, paintings, photos etc of what they've done in their holidays. This week DH and I took the kids to Clumber Park where the boys took their cameras to take some photos for their notebooks, they also picked up some leaves so they could add them. The weather was great until all of a sudden (when we were in the middle of nowhere - LOL) the heavens opened and we got drenched. Luckily DD was in her pram and the raincover came down, the boys both had their rainmacs on "just incase", they just stripped to their t-shirts when we got back to the car whilst DH & I came home soaked! 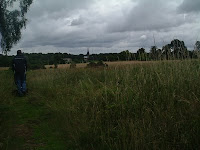 He's getting quite good with his photography now, been taking photos since just after his 4th birthday. Started with a fisher price digital camera we bought him for that Christmas and is now using a Fuji that my dad had when he first went digital. DH wants to buy him one of the Tuff cameras for this year now he's really into taking photos. 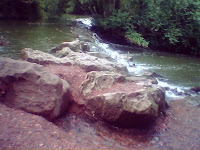 This photograph was taken by Luke on the fisher price digital . Luke was 3 in April and has already caught the photography bug from his dad and big brother. This is one of the waterfalls near the bridge in Clumber Park. As you can tell with a childs camera the quality isn't fantastic but they're great "starters" for kids who want a go as the outside is rubber incase of dropping!

I didn't take my camera!!! Too busy pushing the pram with Darcy in. I've printed out some of the photographs the boys took and glued them into their holiday notebooks so they're thrilled. We're on holiday soon so no doubt both boys will want their batteries charging and cards emptying to take away with us.....between DH and my sons there's always a flash going off somewhere, always wondered what it felt like to be famous and photographed all the time - LOL!

After finishing my Rainy Days project I decided to start on the ASAW Sal at long last. The grid had been finished ages (mostly done sat in the car on the school run!), for the grid I used a mix of DMC green and cream, just 1 strand of each as I liked the combination. 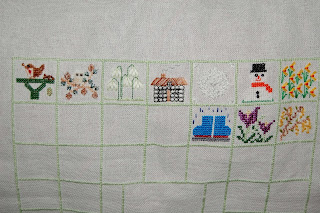 Labels: A Stitch A Week SAL 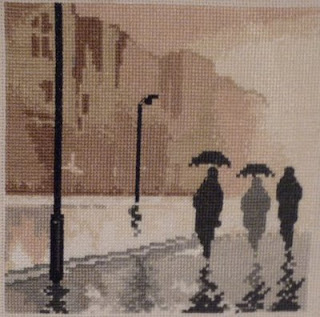 Yes don't faint but the Rainy Days silhouette is actually finished. I cannot believe how long this one project has taken, the last silhouette I did was completed fast. Stayed up late Friday night to finish it off, didn't want to go to bed when there was only a few odd stitches and bit of backstitching to do. I'm pleased with how it turned out.

That's another UFO that has gone into the finished pile. The UFO pile is still bigger than I'd like but I'm getting there now.

Look out ASAW sal because you're next for working on! Going to Hobbycraft this Sunday to pick up a couple of bits I want for it. Only got 2 small motifs to do on my sons Thank You biscornu for his teacher so need to buy some filling as well as mine is all gone. 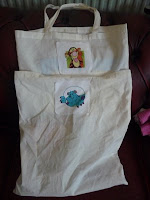 These are the 2 bags I made for my sons to use in the car when travelling. Put Sully from Monsters Inc on Peters as he loves that film. Luke is a big Winnie the Pooh fan so he got Tigger. As you can see they're already a hit. They've got their favourite books inside with some cars and trains and take them up to bed (like their bedroom isn't already awash with toys!) I've got some t-shirt transfers with fabric paints, during their summer holidays they can paint a picture and I'll put it on their bags rather than a t-shirt just so they can personalise them a bit.

I also made one for Peters school friend Thomas as it was his birthday last week. I cross stitched his name on his and also bought him a transfer paint kit. His mum says she'll put his travel toys in it for their holiday...they went Saturday so happy holidays guys. Now both my sons friends want one for their day trips.....better start them soon!
Posted by Jo at 16:39 1 comment: